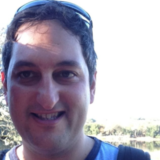 Open source has always been a priority for me because it’s the basis of almost every solution I work with across all of my partners.  Also, I got my start in technology as a tinkerer (Vic-20 was my first PC

) and many of you know what it was like to be using computers back then.  Open source software and hardware comes form the same “bloodlines.” After a long absence for me, I was able to make it back to an open source gathering, and not just any one, but the premier gathering of the bunch, the O’Reilly Open Source Convention, back in Portland, Oregon after the brief detour it took to the Bay Area a few years back.

Like most conventions, there was the open floor with many vendors, including some fun ones like the Makers from Make Magazine and many other companies as well, most of which are F5 Networks Partners: IBM, Oracle, Microsoft, Intel and more.  However, the technical sessions and keynotes were truly the highlights.   Here’s a blurry but awesome picture of Perl creator and guru Larry Wall’s annual State of the Onion address:

You might be able to see that Larry has some steam on his face.  He was sick and he had his penguin shaped humidifier providing him with relief during his talk.   It was amazing to see Larry work in real time.  He took a piece of Perl code and made it Perl 6 compliant in front of us (yes, Perl 6 exists, don’t get started on that argument).

The slides from OSCON are located here: http://www.oscon.com/oscon2012/public/schedule/proceedings and here are some of my highlights from OSCON.

* Automating Cloud Deployments with and Puppet and OpenStack – Puppet and Chef were definitely a theme for the year. This presentation from PuppetLabds tied together a lot of loose ends for me.

* Advanced MySQL Replication Architectures – This presentation by Oracle showed a lot of low level details on the latest in replication with MySQL.

* When Cloud Networking meets Cloud Computing: Software-Defined Networking (SDN) – I found the SDN talk by Big Switch Networks and Symantec to be really interesting, especially because I feel like F5 has so much experience in this space.  It made me excited about the possibilities that F5 is going to bring to SDN in the near future.

Unfortunately, two presentations you won’t find online (I don’t think) were by Damian Conway, author of Perl Best Practices (This is a book you surely own already, but if not, you need to drop everything and go get right now.)  Damian presented on the Perl modules he has been working on the last 12 months and he also did one presentation on VI (suck it, Emacs people? Nah, you’re cool too.) I wish I could summarize Damian’s presentations here but there’s no way I can do it justice.  You will have to search Damian Conway and see for yourself.

If you ever, ever, ever (did I emphasize this enough?) have a chance to see a presentation by Damian Conway, or take a class from him in Australia or anywhere else, do it.  He is by far the most dynamic and talented public speaker I’ve ever had the pleasure to witness.   He also does unspeakable, but wonderful, things with PowerPoint.  You will just have to take my word on this . . . until you see it yourself. Also, a note to OSCON planners: you better put Damian in the biggest room you have next time.

Check out the OSCON site and watch some of the presentations and keynotes and I’ll look forward to seeing people at OSCON 2013!

Historic F5 Account
I went a few years ago, and it sounds like it has continued to rock... Good stuff, wish I was with you :-).Don.
0 Kudos

Historic F5 Account
Don, hopefully we can make a bigger F5 presence at OSCON in coming years. It's really worthwhile. On the topic of Damian Conway, this RegEx debugger presentation from OSCON is on Youtube: http://www.youtube.com/watch?v=zcSFIUiMgAsThis is one heck of a project.
0 Kudos

Historic F5 Account
Oops sorry, that video is from Yet Another Perl Conference 2012, not OSCON, but it was very similar.
0 Kudos
Version history
Last update:
‎28-Sep-2012 08:00
Updated by:
Nojan_Moshiri_4